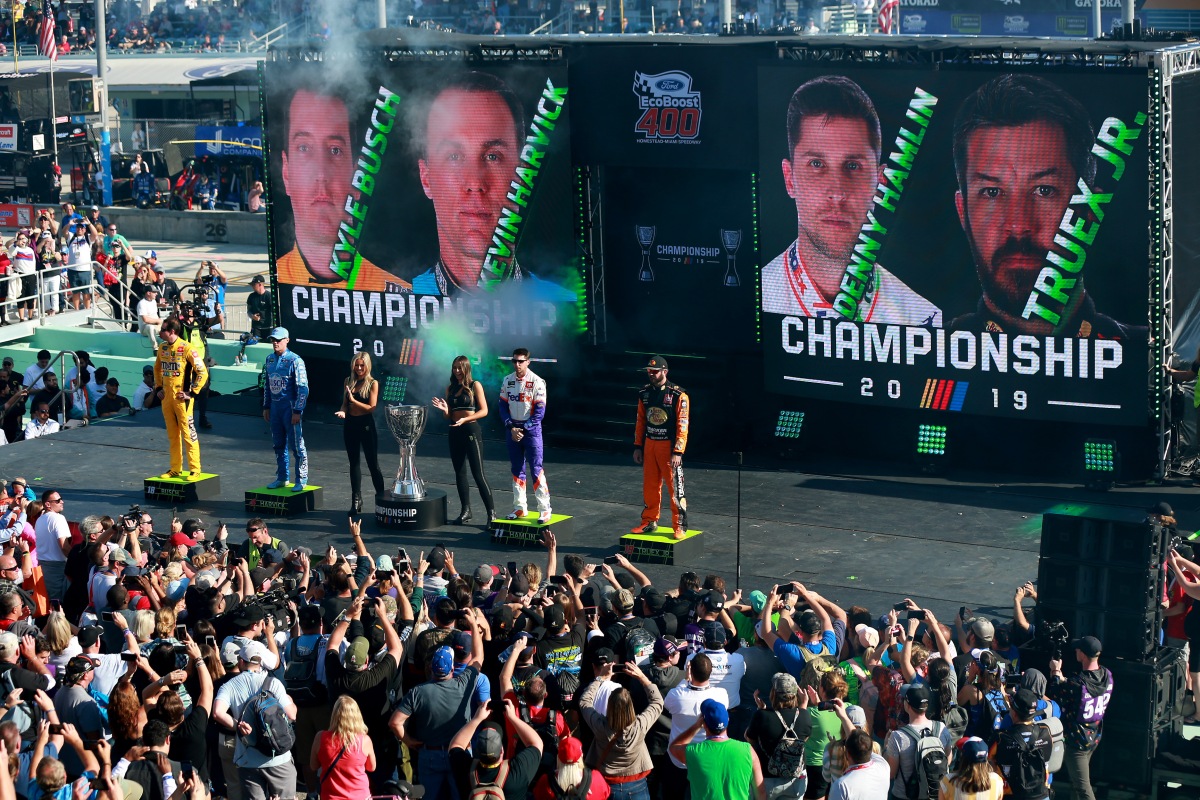 In the leadup to the Ford EcoBoost 400 at Homestead-Miami Speedway, I wrote four columns on the Championship 4 drivers to publish based on who won. Because Kyle Busch took home the glory, that was the one I published at the conclusion on Sunday’s race.

I’d hate to see my work on those other three go to waste, however. So I’m publishing them all in this piece.

They’re in order of where the other three drivers finished on Sunday.

Some of the numbers in these will be a little off, because I wrote them two or three weeks before the season ended.

Without further adieu, here’s the columns that didn’t go public.

The White Zone: Truex cements spot in hall of fame with second championship

Six years ago, Martin Truex Jr. sat on his front porch and thought his career was over.

And why wouldn’t he? After the black eye to NASCAR that was spin gate and the departure of his sponsor, NAPA, in response to the events of Sept. 7, 2013 at Richmond Raceway, his career hit rock bottom. A ride came calling in the form of Barney Visser, who offered him the seat of the No. 78 Furniture Row Racing machine that Kurt Busch drove to a playoff berth.

From his worst full-time season of his professional career to his girlfriend, Sherry Pollex, being diagnosed with ovarian cancer, 2014 for Truex has been well documented at this point; as has his career resurrection.

Fast-forward to Sunday’s Ford EcoBoost 400 at Homestead-Miami Speedway, he *quick summary of his race* to win his second Cup Series championship.

With his stats, his case for induction into the NASCAR Hall of Fame is now a matter of whether he’ll go in on his first ballot. Not if he’ll make it in, period.

He’s the 16th different driver to win multiple Cup championships and ninth to do so with different owners (Furniture Row and Joe Gibbs Racing).

Of the 33 drivers that’ve won a championship, only nine have more than Truex. And only Jimmie Johnson isn’t in the hall yet, because he’s still active.

His 26 career victories put him 30th on NASCAR’s all-time wins list, tied with Dale Earnhardt Jr. and Fred Lorenzen. Only six drivers ahead of him on the wins list — Earnhardt, Carl Edwards, Matt Kenseth, Kevin Harvick, Kyle Busch and Johnson — aren’t in the hall yet.

In the last five seasons, only Busch (26) has more wins in the Cup Series than Truex (24).

If you still have doubt after taking all of this into consideration, I don’t know what else to tell you.

Tragedy thrust Kevin Harvick into the ride of a NASCAR legend. Now, after winning championship No. 2, “Happy Harvick” joins the ranks of that legend.

Now granted, Harvick had long since broken out of the shadow of Dale Earnhardt — whom he replaced at Richard Childress Racing, following his fatal wreck on the final lap of the 2001 Daytona 500 — with his first Cup Series championship in 2014. And given that his numbers make him one of the elite drivers of the 2010s (more on that later), it’s foolish to say, otherwise.

But with this second championship, he’s now on par with the legends of NASCAR, including “The Intimidator.”

He’s now the 16th different driver to win multiple championships in NASCAR’s top series. For context, only 33 drivers have ever won a single Cup Series championship. His 50th career win, a feat accomplished by only 13 other drivers, moves him into a tie with Ned Jarrett and Junior Johnson for 12th on NASCAR’s all-time wins list.

And just like Earnhardt, Harvick is one of the elite drivers of his era.

If even now, you still don’t believe Harvick is a NASCAR legend, there’s nothing that will convince you.

The White Zone: Hamlin is finally a champion

Just nine days ago, Denny Hamlin said he’d be fine with going down as this generation’s Mark Martin. Sunday at Homestead-Miami Speedway, he accomplished what the aforementioned NASCAR Hall of Fame member couldn’t.

*details of his race at Homestead* to win the 2019 Monster Energy NASCAR Cup Series championship.

No longer will the 38 career victories include the goose egg in the championship column. Now, he’s among 34 drivers who’ve won a championship in NASCAR’s top series. For context, 2,935 different drivers have started at least one race in the Cup Series. Among that 98.84 percent of drivers who never won a championship is the aforementioned Martin, who finished runner-up five times.

Just like the Washington Nationals did a month ago against the Houston Astros in the World Series, Hamlin squashed the ghosts of his past; be it the stretch of poor finishes in 2006, 2009 and 2012, or missing the mark on fuel at ISM Raceway in Phoenix in 2012 that let Jimmie Johnson back into the picture to win his fifth consecutive championship.

And then there was 2018, where he went winless for the first time in his career, while teammate Kyle Busch had a career season.

Coming into this season, Hamlin’s future was in doubt. 2017 Cup Series champion Martin Truex Jr. made the jump to Joe Gibbs Racing. Busch was coming off his fourth consecutive Championship 4 appearance and it was unlikely Coach Joe Gibbs would part with a generational talent like Erik Jones.

True, Hamlin was signed through 2020, but with Christopher Bell coming up through the pipeline, the writing was on the wall: Win or find a new ride.

And win he did.

From the emotional roller coaster of winning the Daytona 500 just weeks after the death of J.D. Gibbs to putting on a clinic in a must-win situation at Phoenix last Sunday, he got the job done.

Hamlin, who turns 39 on Monday, could retire and have an excellent case for induction into the NASCAR Hall of Fame. Whether he goes in on his first ballot is debatable.

What he’ll never hear again, however, is that, like Martin, he couldn’t get the job done.

I'm a NASCAR writer for SpeedwayMedia.com and student at the University of Tennessee. View all posts by Tucker White

This is a text widget. The Text Widget allows you to add text or HTML to your sidebar. You can use a text widget to display text, links, images, HTML, or a combination of these. Edit them in the Widget section of the Customizer.
%d bloggers like this: